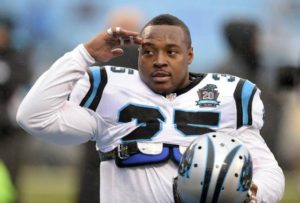 Coach Ron Rivers stated “I feel very fortunate to have coached Mike for nearly his entire career,” Coach Ron Rivera was also with Mike Tolbert when they were both with the San Diego Chargers for two years 2008 to 2010. Ron Rivera also said “He was someone we targeted in 2012 because we felt he would be a good addition to our offense and he was very productive for us. He brought great energy and leadership to our locker room and I wish him the best.”

The unfortunate release of Mike Tolbert gives the Carolina Panthers a little over $50 million in salary cap space to use during free agency. Mike Tolbert will be missed and was a fan favorite of which he was nicknamed the bowling ball. Mike Tolbert made the Pro Bowl with the Panthers in 2013, 2015 and 2016. Mike Tolbert should be picked up fast and will be a good fight with any team.

The Carolina Panthers are making major moves early and this probably has to do with the need to sign Kwann Short to a long-term contract. Victor Cuz who was cut by the Giants was seen in Carolina. This could be a sign that Carolina is making a run to be Super Bowl contenders again.