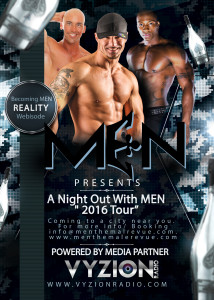 Vyzion will also be a media distribution outlet for “Becoming MEN” a webisode series produced and created by Redd Angel Media, MEN Entertainment LLC and co-produced by Vyzion Radio. Viewers will get a peek of what it takes to become a top male revue. Get to know and travel with MEN on a day to day. The MEN Male Revue Webisode Series is scheduled to air in late December 2015

MEN is Headquartered in Charlotte; MEN is comprised of several entertainers from around the country. They are no strangers to leaving their audience breathless and wanting more. This Vegas Style Revue Mirrors Magic Mike in so many ways however their motto “We do this for real” They took center stage in February of 2015 at Label Nightclub the #1 Nightlife Venue in Charlotte NC. They have announced their “A Night Out With MEN” 2016 Tour www.menthemalerevue.com

Vyzion Radio is on the face track to becoming one of the #1 online radio stations on the net. It is geared towards the music and entertainment enthusiasts. With a global fan base and a plethora of Top DJ’s around the country in house they are sure to continue to be your #1 source for all things entertainment. www.vyzionradio.com