Meek Mill is going on the record and claiming that Drake does not write his own raps.

According to Meek Mill everybody who works with Drake has known this. He would not have had Drake on his new hit track called RICO 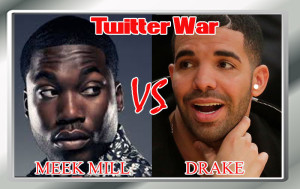 had he known. Meek Mill tweeted stop comparing Drake to me. He don’t write his own raps! That’s why he ain’t tweet my album cause, we found out. He also posted “he ain’t even write his verse on my alum if we would knew we woulda took it off my album. I don’t treat my fans! LOL.

Meek Mill went on to add that everybody knows that Drake does not write his raps. He stated you can even ask Nikki Minaj or Lil Wayne. To make matters worse , a supposed Drank ghost writer track was released and it sounded very similar, if not the same as the one that Drake dropped. The ghost writer song is called 10 bands and was written and rapped by Quinton Miller. Funkmaster Flex from Hot 97 played the ghost track version and it really helped support the Meek Mill claims that Drake does not write all of his material.

Drake and his camp have yet to respond to. Drake did make a statement saying “I signed up for greatness. This comes with it”. One of the worst things a rapper can do in his career is get caught not writing his own material. This could be the next big rap battle. Meek Mill is worth 3 million Drake is worth 75 million. It looks like Meek Mill is not afraid to go head to head with a giant, but again Drake might be thinking Im rich I don’t have to write anything.

Find us on Google+