In the world of Greek letter organizations, hazing is a practice that is not taken lightly. Each year Greek Letter organizations find themselves suspended from their prospective campuses, all the way to being removed indefinitely, for taking part in hazing. Marian 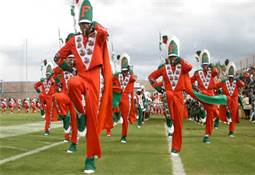 Webster defies hazing as an initiation process involving harassment. In the case of Florida A&M’s Marching 100, it lead to the death of drum major Robert Champion. He was killed while taking part in the final initiation into the band where he had to walk from the back of the band’s bus to the front, while receiving blows to the body from band members who held seniority within the band.

On June 27, 2013 the Florida A&M University Interim president announced that the suspension of the Marching 100 has been lifted.

Florida A&M University’s new Director of Marching and Pep Bands, Dr. Sylvester Young, will make the choice when the Marching 100 will return for any public appearances. In a news conference, Young states “We’ll see. We are moving in the right direction,” as he acknowledges that the band has much work to do before they will be ready.

The announcement of the return of the Marching 100 has caused much out lash from the Greek community. One member of the Greek letter organization Omega Psi Phi Fraternity Incorporated, goes on to express their thoughts, via social network Facebook. “So the #100 is back and they killed someone, but the redz [Delta Sigma Theta Sorority Incorporated] were suspended for 3 years….. Now that’s ‎#flaw ‎#green and ‎#unexplainable… Who does more community service? ‎#imdone”

This is one of many Greeks that feel that the decision to bring the Marching 100 was only about business and not about what is right. There is no doubt that the Marching 100 practiced hazing, but why is when it comes to money; it is swept under the rug as if it never occurred? The Marching 100 brings several dollars into the campus of Florida A&M.

All Greek letter organizations have certain protocol, or “intake” procedures, that they follow when bringing new members to their organization. All Greek letter organizations, have adapted Anti-hazing into their bylaws. Even the legal system has stepped in and made hazing a felony. At Florida A& M alone, during the fall of the 2012-2013 academic school year, 20 allegations of hazing involving official student organizations were reported, which resulted in the suspension of two organizations. It is not exactly clear what lead to the suspension of Delta Sigma Theta Sorority Incorporated on the campus of Florida A&M , but it is certain that it was not the death of a fellow student ,yet they received a three year suspension sentence; even though the organization is known for their community service involvement.