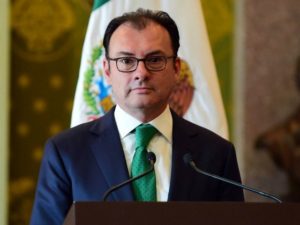 take the issue to the United Nations in defense of immigrants. Mexico and Luis Videgaray appears to be digging their heels in preparation for a Trump mass deportation policy.

Luis Videgaray said “I want to say clearly and emphatically that the government of Mexico and Mexican people do not have to accept provisions that one government unilaterally wants to impose on the other. We will not accept it, because there’s no reason why we should, because it is not in the interests of Mexico.”
Luis Videgaray also stated “Let there be no doubt. Mexico and the government of Mexico will not hesitate to go to multilateral organizations, starting with the United Nations to defend, in accordance with international law, human rights, freedoms and due processes in favor of Mexicans abroad.”

This could pose a huge problem for the Trump Administration because of the immigrants who are not from Mexico will most likely not be accepted. There are a lot of immigrants that are from other South American countries that Trump Administration will have to figure out how they will get them back to their country’s of origin. The logistical cost alone would be astronomical for what will be the largest deportation of humans in the history of mankind.

The announcement made by Mexican Foreign Minister Luis Videgaray could be a prelude to Mexico preparing to stop purchasing corn from this US over a span of the next three years. This could cost America farmers over 1.3 Trillion in revenue. The Trump administration has insisted that the need for the deportation push is strictly for national security purposes.