Joe Jonas now has street cred thanks to Lil Wayne. For guys in the entertainment business all you have to do is have your people call someone 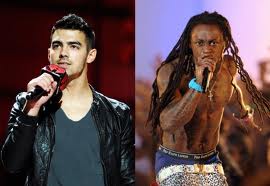 else’s people and you do a movie or record a track together and there you go: street cred. According to Joe Jonas, the two hit it off right away after their first meeting three years ago at the VMAs. When Joe Jonas started his new album, Lil Wayne wanted to be a part of it. And that’s how Lil Wayne ended up on Joe Jonas’ new single “Just In Love”.
Now for those that don’t know, Joe Jonas is one third of the pop sensation the Jonas Brothers along with his two brothers Nick and Kevin. The Jonas Brothers have been a staple in the Disney array of stars for the last three or four years.

Television guest spots, television movies, and even with their own show, the Jonas Brothers have created a strong following with the tween set through Disney. In comes Lil Wayne, the rapper that’s been in the game since 1991 at the age of nine. A rapper so hot right now that he’s listed in the 2012 Guinness
Book of World Records for the record of Most US Hot 100 Hits By A Rap Artist with 64 hits between 1999 and 2010.

Put these two together and it’s a win /win. Both artists get to cross over and pick up some of the other’s audience, however, Lil Wayne has done so many collaborations and been in the news so much recently that I don’t think he needs anymore help getting noticed. This single does expose Lil Wayne more to the tween set and Joe Jonas to more of the hip hop set that would not buy a Jonas anything before now.

I listened to this song, not knowing what I would find. This is not a bad song however it has gimmick written all over it. We know what this is.

This is putting two stars with different audiences together for crossover fan base results. But that’s what’s happening all the time now. For example, let’s take it all the way back to RunDMC and Aerosmith doing “Walk This Way”. This song is a classic collaboration for a few good reasons besides being groundbreaking in the industry. In today’s industry where everyone is collaborating with everyone, there is nothing special about these songs. We need to go back to a time where it was exciting to see collaborations between different artists. We need to bring the excitement back into music and not make the concept of collaboration so trivial. When “We Are The World” was originally made the excitement was watching the video and seeing some of your major stars on set together. Now it is nothing for Jay-Z, T.I. or Will.I.Am to show up on a Chris Brown, Rihanna or Robin Thick  track.

Check out the new “Just In Love” track with Joe Jonas and Lil Wayne and tell us what you think of the death of the collaboration. Is the industry taking the whole concept too far? You can learn more about Joe Jonas on his website joejonasmusic.com and you can learn more about Lil Wayne on his website lilwayne-online.com. Well, at least, they haven’t started collaborating their websites.