This is an especially unique situation in the fact that LaToya Rene is the only independent artist to be represented by BBSM.

LaToya Rene – From Beginning to the End Recording artist LaToya Rene of DCL Studios had the privilege of singing The National Anthem at both the season opener and National Championship game for The Cape Fear Heroes’ Indoor football team at the Crown Coliseum in Fayetteville, NC.

The season opener was attended by a record setting crowd of 3,000 people who enjoyed an easy road to victory for their Cape Fear Heroes with a score of 91-26. La Toya René did more than great in her performance at that show, as she was greeted with overwhelming praise.

Even better was her performance in the National Championship game which was attended by more than 5,000 people. The Cape Fear Heroes enjoyed victory in that game 72-21. 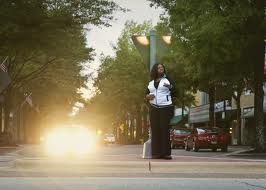 Everyday I’m approached by many artists who are hoping for their next shot at making it big in the music industry.

Many are willing to do whatever it takes for that once in a lifetime opportunity to showcase their skills in front of a major label executive.

I sat down with independent artist LaToya Rene, as she described her experiences as a female singer/songwriter and the fight to be heard and not judged by your looks.

LaToya plays a number of instruments including the guitar, bass, drums and piano and has a 6’2″ stature with a very distinctive voice. Despite the rules of the industry, she has attracted the attention of labels such as Interscope, Island Def Jam, Epic and Bad Boy.

Erica McRae: Everyone has a background which motivates them to hustle hard, what’s your story?

LaToya Rene: My grandmother introduced me to music but when she passed of ovarian cancer, it caused my life to be unstable because I had to go live with my mother, who has a bipolar disorder and was an alcoholic. I was constantly shipped off to a different house whenever she had to be sent to the hospital. Thinking of that only pushes me that much harder to succeed.

How would you describe your style of music and what makes you different than everyone else in your genre?

If I had to classify myself it would be R&B merged with Neo-Soul. I’m like the female Cee-Lo Green. Now days, people are just putting out anything, but I’m going back to the basics.

Who are some of your musical influences?

Definitely Missy Elliot. She’s a triple threat and a renaissance woman in all aspects, also Michael Jackson and Elvis! I could listen to “Blue Suede Shoes” all day.

Whether Gospel, Country, Orchestra or Classical, what made me fall in love with music was the art of storytelling; you can listen from beginning to end and that’s what I do in my music.

What strategies have you taken to break your way into the music industry?

Staying true to myself and never taking “No” for an answer.

Of all the experiences you’ve gone through, what has been the highlight of your journey to the top?

When I sat down with Def Jam A&R Lenny Santiago. He gave me positive feedback and stated how he could hear my music sang by artist such as NeYo.

If given the opportunity, what artists would you love to write music for?

The music industry is very competitive, there’s always a younger face ready to take your spot. What do you plan to do to maintain your position?

Keeping my ear to the ground; it’s very prevalent that I stay relevant. A lot of artists hustle hard, but when they achieve their goals, they slack off. It’s all about remembering why people fell in love with you and staying true to yourself; I’ll take the bus if I have to; just to stay humble and mingle with everyday people.

What trials have you faced during your hustle to break into the business, and what advice would you give to female artist who are experiencing the same things that you’ve went through?

It’s tough being a female in this industry. I’m 6’2 and I have a deep voice; most people can’t handle that. I don’t fit the mold of Ciara and Beyonce but I have talent and that’s the main focus. I would tell any female to be honest with their selves. What are you willing to give up in order to fit in? No matter what, you are going to give up something; it just depends on what you choose it to be.

If you were to perform a cover song at a huge event, which song would you pick?

Probably a song by Jasmine Sullivan or Adele.

What projects are you currently working on?

I have a CD that I just released entitled Back to Jupiter and I have singles out called “Midnight Session” and “Pursuit.”

Recently I read an interview that you had with J’Adore and you spoke briefly about your home life and how it impacted you, have you had a chance to tell your story through song and if so which tracks would you recommend to others who may be going through similar issues?

I have not told my story through song. I’m not sure that I’m at point where I can put that to music just yet. So I don’t have a track that specifically pertains to that particular part of my life.

Understandable, many artist began to become interested in music after being inspired by other artist during rough times, what artists or songs did you listen to that got you through the tough times and how much of an impact do you feel the artists or songs made on your decision to become an artist yourself?

Prince, Michael Jackson, Elvis, gospel and really whatever was being played at the house or car I was in during those challenging times. I listened to the sound track of life. Typically during tough times, I didn’t realize I was in a tough time until someone else would ask me how on earth I made it through. Michael Jackson and Elvis are the reasons I started. I saw a special on both of them in the same hour and I turned to my mother and said “I want a candy apple red guitar trimmed in black.” She heard me loud and clear. the rest is history

So you took interest in the guitar early, do you play the guitar or any other instruments?

Yes. I play the guitar, bass guitar, drums and keys. There are a few others but I only like to brag on the basketball court after I block a shot or three

Sounds like you are a jack of all trades, not only are you an artist, but you play basketball as well. Do you find time to still play since you are very much so involved in music?

Yes I try to find time to play. I think it’s important to be involved in more than one area.

I also read that you coach a basketball team, how important is it to you to give back to the community and to be an example for the youth?

I coach an intramural team and help out with a middle school team from time to time. I think it’s extremely important to give back to the community. In many ways it helps you so as a responsible adult, you must give back. As for being an example for the youth, it’s just as important. You never know who is watching you or listening to you. So it behooves you to stand with respect and dignity. Make sure that you treat EVERYONE with the utmost respect and dignity. Youth don’t hear your words they “hear” your actions.

Now to talk a little about your album “Back To Jupiter”, how did you come up with the title and what are your favorite tracks from the album?

I came up with the title while joking with a friend. I would say “let’s take this Back To Jupiter!” meaning lets take this back to the basics or make it plain. After saying it so many time we got on the discussion of music and how they need to take it Back To Jupiter (basics). My favorite tracks are “Midnight Session”,  “Repeat”, “Pursuit” and “Maroon Five.”

Did you produce any tracks from your album and are there any producers you wish to work with on future projects?

I produced all of the tracks except for “Selfish Love.” My friend William Kid Azul Blue produced that track. In the future I would like to work with Blue again and Lee Blake. Once I hit big time I want to work with Missy Elliott, Andre 3000, Cee Lo, and Brian Michael Cox.

How do you manage to keep your business organized and what steps do you take to ensure that you can focus on your craft?

I try to keep things as simple as possible. I plan out my days after asking myself what is the big picture supposed to look like. I’m not perfect and forget sometimes so I also utilize the help of my music manager.

To ensure that I focus on my craft I schedule time for it. I treat it like a class. For a class you have to study the subject, practice the subject, and apply what you’ve learned through a display of some sort. I also schedule time away from my craft. Like a boyfriend, I may love him to death but I don’t want to see him every moment. I try (key word “try”) to let Ernesto handle a lot of the business. Any artist can tell you it’s tough to have a creative moment when you have to handle a mundane situation in order to be creative.

You also have a studio of your own, I’m sure you record yourself but are you interested in opening up your studio to record others and if so how can they reach you?

Yes. I offer recording time. Right now I am renovating the studio so I can fit a full band in here. The best way to reach me is via facebook or email at www.facebook.com/officiallatoyarene or latoya@latoyarene.com.