Ray J’s video I Hit it first….wow there is much heat going on between Ray J and Kanye West because of this song called “I HIT IT FIRST”. Well if you do not know we are going to give you the scoop right here on the ZX Files. Most of you know Ray J and Kim 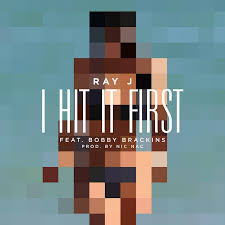 Kardashian did a porn movie in 2007 which brought her lots of attention and also did the same for Ray J. Now that has happen and passed so we thought…Kanye West and her hooked up and then all of a sudden Kim is pregnant so of course that is a open door for Ray J to talk so what does he do he walks right in. Now it has gotten really heated because this whole video “I HIT IT FIRST” It has been put out to let Kanye West know he hit it first and once you see the video Ray J is just putting it in his face in the worst way he even got a Kim look alike to do the video minus the sex. Now Kim has not responded yet to all of this but Kayne has said he is not going to sink to Ray J’s status level because he has a baby on the way. Kayne West and Kim Kardashian also stated that right now they are not in a rush to get married….hmmmm wonder why???? Take notice if you look at the pictures of Kim Kardashian and Kanye West together and then look at the pictures of Kim and Ray J…..Ray J looks like a younger version of Kanye somewhat. Now this has also surface up there are more rumors floating that Kim’s mom and sister are trying to break the 2 up and what was she thinking by having this baby by Kanye.

Kanye West performed at a Met Gala and as he sings to the audience he say she is the best and tells the haters to stop hating and leave Kim alone the past is the past and he is the present and sources say she just smiled sitting there and loving it!

Now with all of this going the ZX Files is going to have to give this mess and XXXXX… GET OUT OF HERE!!!! Because we think that the past should stay in the past who cares what Kim did back in the day just think for a moment if she went back to Ray J or Kanye’s past I am sure they would find skeletons in their closets too and that goes for anybody because no one is perfect so remember before you judge “check yourself”!!!!!

Check the Zx files every Wednesday for all your entertainment info!!!!