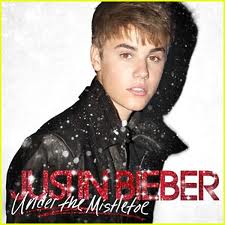 away from the warm feeling of them. Now Justin wants to make one? Come on, he can’t even really sing and I personally don’t even think that he is cute. Well, I don’t. So this Christmas Justin Bieber will be blessing the youngsters with his Christmas album called “Under The Mistletoe”. Finger in mouth. Gag!!  The album has 15 songs on it. Justin Bieber covers the classic songs such as “Santa Claus Is Coming To Town”, “Silent Night” and “Fa La La”. Justin also has big names on his album like Mariah Carey, Boyz II Men and of course Usher. Go figure. I knew Usher would be on this album. Some of ya’ll might say I am a Justin Bieber hater, but I’m not. I just can’t take this popcorn singer.  Now he wants to do a Christmas album.

Here I am writing about it, which is promoting it. But I just had to say how I feel about the whole situation.  I know there has to be other people that feel the same way I do about the album. I just think Christmas albums should be left to the real singers. I can’t imagine the Christmas song being sung in auto tune. Really? I really don’t even want to give it a fair chance. I know that he’s going to make money off of it but I’m not going to buy it. I would rather stick to the golden oldie Christmas songs. I barely enjoyed Mariah Carey’s Christmas album.

But I do admit that I loved Boyz II Men’s Christmas songs. They sing. But Justin Bieber is really just using the big names just to get the album sold. Well we will see when it comes out. I am the music critic so that’s what I do criticize. What more can I say? I am not saying don’t buy the album. I am just saying that I personally don’t want to hear anymore Christmas albums. That is it!!!