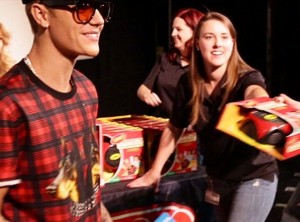 Justin the youngest Santa Claus yet spent thousands of dollars of his own money on presents that he gave out to some of his American fans.

Ahead of the release of his new film “Believe This Christmas”, Justin Bieber saw it proper to surprise 150 boys and girls by gifting them with presents. The boys and girls belong to a youth club in Los Angeles that had attended a special screening of the film on Monday.

A source close to the Canadian singing superstar was quoted saying that Justin Bieber interrupted the movie to tell the boys and girls that he brought along something that would help them kick start their Christmas in a good mood.
Justin went on stage, presented the boys and girls with toys that he’d bought for them and went ahead to sing two songs one of the songs being Christmas love that you can get on iTunes.

After he was through with his singing, instead of leaving, he opted to sit amongst the crowd and together with the boys and girls watched the rest of the movie. This act took everyone by surprise and they were shocked because they didn’t know whether they should watch the movie or simply look over at Justin.

This indeed was a super happy moment for everyone and they didn’t know whether they should catch the film or just sit and ogle at Justin Bieber. One of the attendees was quoted saying ”It was an early Christmas present they won’t forget and a side to Justin a lot of people don’t always see.”

Christmas Love was one of the songs Bieber recently performed during a gig he rocked at the Philippines. He sang the song during a fundraiser trip that was aimed at helping the people who lost loved ones after the deadly destruction of Typhoon Haiyan. Bieber was touched by the devastation and used his personal money from his pocket to purchase water, food, sports equipment and bought hundreds of books which he took with him to Philippines and distributed them among the affected community.

After he’d met up with locals in the Tacloban city, Bieber went ahead and performed an acoustic show and participated in a local basketball tournament. Speaking of the fundraising efforts Bieber was quoted telling a British paper (The Mirror) that the recent trip he took to the devastating areas of the Philippines completely humbled him, especially when he saw how harshly the communities were affected by the hurricane.

He was quoted saying that the response that they have had to give the #GiveBackPhilippines campaign has been phenomenal. And the fact that the campaign was able to raise 1.2 million dollars in less than a week’s time proves that the human race has the capability of securing a stable future for typhoon victims.

In his own words; Justin Bieber said that his intentions are to stay involved and to carry on raising awareness and to do all that is possible to continue making a positive difference, in the lives of the boys, girls, women and men of the Philippines