Johnny Manziel and his problems are mounting and according to sources he was dumped by his agent Eric Burkhardt. 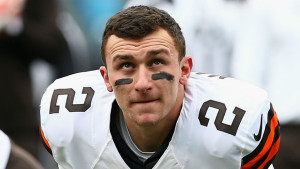 Rumors also surfaced that the Cleveland Browns would most likely sever their ties and cut the troubled order back after the Superbowl.

Johnny Manziel is also pending a domestic abuse incident that happened betweeen him and his girlfriend Colleen Crowley. Eric Burkhardt his ex-agent released a public statement about his decision to sever his ties with Johnny Manziel.

Eric Burkhardt stated “it is my deeps regret that, after several emotional and very personal discussions with his family, his doctors, and my client himself. I have made the decision to terminate my professional relationship with Johnny Manziel. Though I’ll remain a friend and Johnny supporter, and he knows I have worked tirelessly to arrange a number of professional options for him to continue to pursue, it has become painfully obvious that his future wrist solely in his own hands.”

“His family and I have gone to great lengths to outline the steps we feel he must take to get his life in order. Accountability is the foundation of any relationship, and without it, the function of my work is counterproductive. I truly wish the best for Johnny and sincerely hope he can and will, find the kind of peace and happiness he deserves.”

According to other professional insiders Eric Burkhardt and many others have spent countless hours trying to help Johnny Manziel through his problems and back on track although which he is resisted and refused to change.
Johnny Manziel also has a concerned father, Paul Manziel stated “I truly believe if they can get him help, he won’t live to see his 24th birthday.” Paul Manziel tried to commit his son Johnny Manziel , a rehabilitation facility in Texas to help him recover from drug addiction and or mental illness. It was reported that the facility allowed Johnny Manziel to leave. Paul Manziel stated to the Dallas Morning Sun “that he is upset that his son was allowed to walk away after Paul told a Denton County Sheriff officer that he believed Johnny was suicidal.”

Rumors have it that Johnny Manziel could potentially get picked up by another team. One of the teams that have been mentioned is the Dallas Cowboys. Hopefully Johnny Manziel can get his act together and live up to his full NFL football potential.