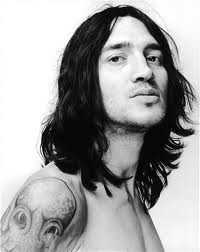 I guess these women are getting crazy, desperate and dangerous. I am always surprised when a man has to take out a restraining order on a female. It almost seems less manly. This shows Who Run The World Girls. All jokes aside, John Frusciante ex Red Hot Chill Pepper guitarist filed for a protection order against a crazed aggressive fan. The fan wanted to secure rights to his life story. August Elizabeth Thomas 32 (no relation to the Thomas in my family) reportedly approached John to write a screenplay about his life.

After he said no she started to spam his mail box and e-mail with letters. I guess to her no means yes. Go figure. She started showing up at his shows and turned up at his house twice in two days. Yea that’s definitely stalking. John Frusciante felt that she was unstable and that she could snap on him. I think that she already has. There is no could in her actions. This is did in her actions. John is also worried about his wife’s safety. Well to this woman the wife will become the enemy. What has this world come to where some random woman thinks that she could have rights to a guitarist life story. He isn’t even the singer. Come on now lady, change your focus. Get it together. You have to think bigger and better.

I don’t really like the fact that these crazies think it is ok to stalk people. I have found myself occasionally sitting outside of people’s houses but I would never threaten them. But dose John really think that a restraining order is going to stop this woman from her pursuit of his life story. I might have to do some full research on his life to see what she finds so intriguing. There really should be automatic lock up or 302 for stalkers. I don’t think that the cops take it seriously. To hell with a piece of paper. How about instant jail time just for thinking about it. That means I would get locked up because I had Nas (Nasir Jones) on my list. Yessss. Anyway, John should be going to court next month about the incident. But what for?

If they are not going to lock the lady down, then it is a waste. She isn’t going to stop. Look how many celebrities that were being stalked, Richard Gere, Steven Spielburg, Jennifer Love Hewitt, Gwyneth Paltrow, Halle Berry, Catherine Zeta-Jones, Mel Gibson, Janet Jackson, Hilary Duff, Jodie Foster, Sheryl Crow, Anna Kournikova, Pamela Anderon, John Lennon, Uma Thurman, and Jerry Lewis. That’s not even all. But one thing that I notice is that I know who all these other celebrities are but I have no idea who John Frusciante is. But I feel for him and his situation. There have been people killed by stalkers because the paper didn’t protect them. I guess the PAPER is supposed to be a shield. IT’S A PAPER. Send her straight to jail. Give her a few months to get her head together. Be safe John…