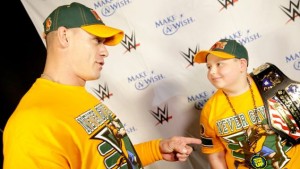 Wish Foundation. John Cena made an appearance on the Today Show and met with Rocco Lanzer , the eight-year-old who is suffering from leukemia. John Cena went on to announce to the whole world that he will be making his 500th Make A Wish contribution Monday night on WWE raw.

John Cena stated a lot of times when people donate time or resources. There is a little speculation about where it goes. I’m at the finish line. I get to see the families; I get to see the joy in the whole that we bring. John Cena also stated that he will continue to participate in the program as long as the Make A Wish Foundation will allow him too. John Cena throughout his WWE career has always been a fan favorite and a superstar that kids and adults alike love and look up to. Great job John Cena and the WWE for giving so much back to the communities and people in need. What you think?