Jerry Springer was on CNN and all on Donald Trump stated that the statue of liberty is the symbol of America not a wall.

Jerry Springer stated that Donald Trump may win the Republican race, but he would not win presidential race 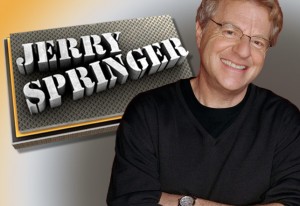 because once you get all of Hispanics, African-Americans, women and the rest Americans in as a whole there is no way that he can compete nor will he get elected as president. He also went on to state that no one is going to want Donald Trump’s finger on the button.

CNN came back a Jerry Springer and reminded him that he had one of the worst television shows ever. Jerry Springer responded by saying “if you look closely at the screen. You will not see one person on the show that has ran for president. That’s the difference.” Jerry also stated that his show was for entertainment and that it was stupid. He is said that for many years and that the show is what it is.

Jerry Springer is one of many TV and music celebrities that are speaking their concerns over Donald Trump’s antics and behavior. Still have a long way to go until election day. Jerry Springer probably have more to say concerning this topic