Jeremy David Mardis a six year old became the youngest person to be killed by police officers this year. Two police officers Derek Stafford and Norse Greenhouse were placed in custody on Friday for allegedly shooting at the 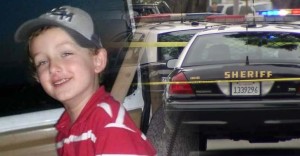 vehicle that Jeremy David Mardis was in. The actual shooting happened Tuesday, November 2, 2015. Six-year-old Jeremy David Mardis died after officers Derek Stafford and Norse Greenhouse shot the boy in his unarmed father. Both had been arrested and charged with murder.

According to sources a chase ensued when the two officers were attempting to serve a warrant for Jeremy David Mardis’s father Chris Few. According to reports after the father’s car was spotted Chris Few did not stop and a chase quickly pursued. Once officers cornered Chris few Derek Stafford and Norse Greenhouse open fire with a total of 18 shots. Col. Michael Edmondson with Louisiana State Police reviewed all of the body camp footage on one of the officers and was quoted as saying on a news conference “it was the most disturbing thing I have ever seen,” he also made them pretty damaging statements about the officers that were involved with the fatal shooting of Jeremy David Mardis “no warrant has materialized” this basically means that they had no justification at all to even pursue Chris Few the father of the victim Jeremy David Mardis.

According to reports there were two of the officers involved the shooting, but there has been no indication that they will be charged. According to CNN. There have been new developments in the two officers involved in shooting of six-year-old Jeremy David Mardis. The two officers are now facing second-degree murder charges that resulted in the death of this innocent six-year-old’s death. Col. Michael Edmondson also went on the record to say as a police officer for 35 years and as a father it was a very disturbing that he had watch what he saw and that is what really helped move the investigation forward. 1 million dollar bonds have been set for both Derek Stafford and Norse Greenhouse

Tell us what you think?