Grammy Award and CMA winning artist Jason Crabb is coming to Lincolnton NC May 15 2014 to put on a live concert at Daystar Family Worship Center!

Daystar is excited to finally get the artist live in concert at the church in Lincolnton! Tickets are limited and going fast so be sure to 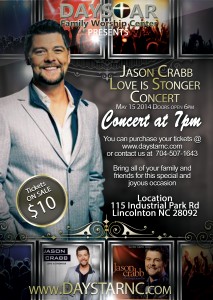 purchase by clicking the banner or filling out the form below!

As a solo artist, Jason Crabb is signed to Spring Hill Music Group. His self-titled debut solo album was released on June 30, 2009.It [singlepic id=126 w=320 h=240 float=left]reached No. 62 on the Billboard 200, No. 2 on the Billboard Christian albums chart, and No. 1 on Nielsen SoundScan’s Southern Gospel albums chart. The album won a 2010 Grammy award for “Best Southern/Country/Bluegrass Gospel Album”.[4] It won a 2010 Grammy Award. The album was also nominated for a Dove Award for Country Album of the Year at the 41st GMA Dove Awards. On September 28, 2010, Spring Hill Music Group released Jason’s second solo project, a Christmas album titled Because It’s Christmas. In 2011, the family group reunited to record a new album, along with a concert tour from the end of 2011 through the beginning of 2012.  Jason Crabb’s new album Love Is Stronger has already been a hit on the billboard charts.

Come out to Daystar Family Worship Center located at 115 Industrial Park Dr. Lincolnton NC May 15 at 7pm to experience Jason Crabb Live on Stage! Be sure to get there early to grab a great seat.  Doors open at 6pm.

Tickets are $10 in advance and at the door.  If you would like to purchase your ticket in advance you can do so by filling out the contact form below.

Your browser does not support iframes. The contact form cannot be displayed. Please use another contact method (phone, fax etc)