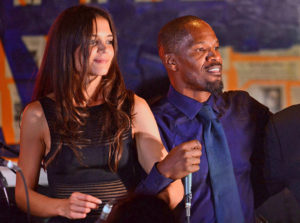 successfully been able to keep everything low-key and out of the tabloids and public eye.

Jamie went on the record last year to say that social media and the tabloid world are always so thirsty to find some type of story. He stated and sometimes when you read this stuff. It’s like wow that’s so not true. Jamie Foxx went on to say that if I do find somebody you will never know about it. So I guess is safe to say that the cat is out of the bag and now everybody knows about Jamie Foxx.