ISIS captured an estimated 50+ Fathers, brothers, sons, cousins and husbands as they lay asleep in their beds prior to being whisked away in the middle of the night by ISIS

. These are men of the Sunni clan; members of 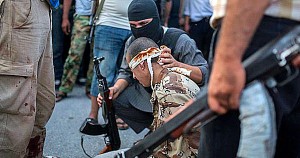 the U.S. Allied Albu Nimr tribe considered amongst the last hold outs against ISIS in Iraq’s Anbar province, west of Baghdad. At this time their fate is unknown, but Al-Ga’oud and others believe they’re most likely deceased; and counted amongst the latest casualties of ISIS who’ve killed hundreds of members in the tribes via mass executions in recent days.

ISIS seized the city of Albu Nimr last month as fighters engaged in heated skirmishes with fighting tribesmen. ISIS was after the city of “Hit” and neighboring Ramadi, Allied Forces strong holds in the Sunni-dominated Anbar providence, after ISIS swept in from Syria taking town after town in the western provinces.

Anbar was the location of many bloody insurgencies during the U.S.-led war in Iraq until an uprising by Sunni tribes, including the city of Albu Nimr in 2006. During this time local Tribal leaders stated that they were ready for an attack by ISIS while awaiting OK’s from local government and possible coordination with American forces.

U.S. officials stress that Sunni tribes must receive and maintain Iraqi support when going on the offensive against ISIS, as a necessary means of defeating militants who refer to themselves as he Islamic State. As they’re will organized, funded and equipped than the tribes men who seek to stop them.

In a news conference this week, Gen. Martin Dempsey, the Joint Chiefs of Staff chairman, signaled the possibility of the new role Allied Forces may play in the situation when stating the Iraqi government had not yet requested U.S. military support in efforts to defend a Sunni tribe that has suffered mass executions at the hands of ISIS militants. But as we all know that is a strong possibility.

“That’s why we need to expand the train-advise-and-assist mission into the … Anbar Province,” Dempsey said. “But the precondition for that is that the government of Iraq is willing to arm the tribes.”

The abduction and suspected killings follows reports of public executions and several gruesome discoveries of mass graves containing the bodies of tribesmen killed by ISIS. The bodies of an estimated 200 members of Albu Nimr were found in a mass grave outside the city of Hit, as confirmed by a senior Iraqi security official to CNN.

ISIS fighters captured the tribesmen after it took control of the area. And an additional 48 tribesmen were marched through the streets of Hit before they where publically executed.

Videos of these executions have been released to the public via the Internet.

Recently CNN learned of chilling details of how jihadist first demanded that the members of a Yazidi religious minority group convert to Islam. Once they refused they stripped the villagers of their jewelry, money and cellphones; separating the men from the women.

“ISIS gathered all the males older than 10 years of age at the local school, took them outside the village by pick-up trucks, and shot them.” The women were put in a three-story house by the hundreds; while the men of ISIS came in periodically, chose up to three and four girls at a time and took them home to be wives and slaves. Some of the young women where sold and subjected to physical and sexual violence, including systematic rape and sexual slavery. They’ve also been exposed in markets in Mosul and in Raqqa, Syria carrying price tags.

According to the field research, intelligence and testimonials; ISIS kidnapped more than 2,500 Yazidi women. Meanwhile Narin Shiekh Shamo, a Yazidi activist based in Iraqi Kurdistan has compiled the names of at least 4,601 Yazidi women currently missing. ISIS actually justified its enslavement of Yazidis in its own online magazine by releasing the official statement: “One should remember that enslaving the families of the kuffar — the infidels — and taking their women as concubines is a firmly established aspect of the Shariah, or Islamic law,”

The group announced in the ISIS publication “Dabiq.” Kurdish authorities say they have rescued around 100 Yazidi women, in part through the payment of ransoms to Arab tribesmen who acted as intermediaries. At this time, Thousands of women remain hostage under ISIS control. As ISIS is successfully defending its territory from a coalition of Iraqi military, Iraqi Kurdish Peshmerga, Syrian Kurdish militants and US led airstrikes.

The question that many people have on their minds is ‘who are these people?’ In this day in age were do such extreme religious militant groups find the funding to purchase armored vehicles and military grade weapons and training? These are not ordinary citizens taking a stand against a faulty government, these are men who’re well funded, equipped and trained to carry out the most destructive gorilla war fare against both World Government Entities/Military combative units and unarmed civilians alike.

Not only are they kidnapping and killing people in broad daylight, but also they’re enslaving women; and posting all of this to a successfully operated social media platform. Thus the Million Dollar question of the day; who’s backing this group?

Visit us on the Web: http://hovent123.wix.com/welcome

Connect with me on LinkedIn: http://www.linkedin.com/pub/tasha-poullard/24/416/b55