Iggy Azalea is finally done and over with Nick Young.  According to 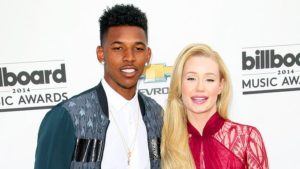 Entertainment Tonight it looked like Iggy Azalea threw all of Nick Young’s personal belongings out of her place and on the curb.

The items thrown out in the front yard included Nick Young’s furniture a four wheeler and other personal belongings. All of this happened the day after the Iggy Azalea announced to the world that she had officially split up with NBA Lakers star Nick Young. She also had the 1962 vintage Chevy Impala towed off of her property. This car was originally given to Nick Young by Iggy Azalea as a Christmas present  in 2014.

On Sunday Iggy Azalea made it clear that she had trust issues with Nick Young and all of this stemmed after Nick Young’s Laker teammate D’Angelo Russell recorded him confessing that he had cheated on Iggy Azalea and then leaked it out as a joke for the whole world to hear.

The couple had been engaged for about a year before all of the trouble started. On Sunday Iggy Azalea went to instagram and posted “unfortunately, although I love Nick and have tried and tried to rebuild my trust in him- is become apparent in the last few weeks I am unable to. I genuinely wish Nick the best. It’s never been easy to part ways with the person you plan your entire future with, the futures can be rewritten as of today. Mine is a blank page. Nick Young’s a response that one word single.

It’s going to be very interesting to see how D’Angelo Russell and Nick Young can thrive together on the same team with the Lakers. Rumor has been circulating that D’Angelo Russell will be traded. This just goes to show due dirt get dirt.