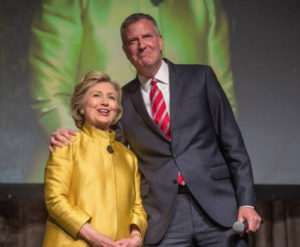 made between her and New York City Mayor Bill DeBlasio during a charity dinner. All of this happened right after her husband Bill Clinton’s run in with Black Lives Matter who accused the Clinton’s of not taking the black vote serious and for being a major cause of all of the African-American issues.

Hillary Clinton came out on the stage and said “Thanks for the endorsement Bill.  It took you long enough”. Mayor Bill DeBlasio then came back and said “sorry Hillary, I was working on CP time”. CP time is a derogatory term that means colored people time which insinuates that black people are always late. The African-American actor that was on stage quickly let Bill Bellagio know that he did not like jokes like that. Hillary Clinton stepped in and jokingly said that it meant cautious politician time.

So far there have been no apologies from Hillary Clinton or Mayor Bill Bellagio. The is probably because most of the African Americans have already voted for Hillary Clinton and it is highly unlikely that there will ever be an apology.