So it has come down to this.  Herman Cain, http://hermancain.com, is reassessing his GOP candidacy for president.  This decision should come in the next few days after almost two months of accusations of past sexual harassments and a more recent 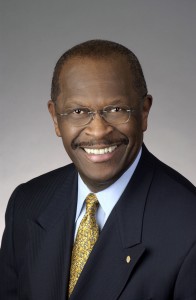 story of a 13 year adulterous affair.  In a conference call Tuesday morning, November 29, Cain announced to his staff that he is reassessing his presidential campaign.

Most people dismiss Herman Cain a presidential hopeful based on his former employment as CEO of Godfather’s Pizza, however, he has quite an interesting and experienced background.  Cain’s education consists of a Bachelor of Science in mathematics from Morehouse College in 1967.  He then attended Perdue University for his graduate studies and received a Master of Science in computer science in 1971. During that time Cain worked full-time as a ballistics analyst for the US Department of the Navy.  Since this time, Cain has accumulated an impressive resume.  He has been a business executive, syndicated columnist, and a radio host in Atlanta, Georgia.  From 1986 to 1996, Cain served as chairman and CEO of Godfather’s Pizza, for which he is well known.  Cain also worked with the Federal Reserve Bank of Kansas City, serving as deputy chairman of the board of directors from 1992 to 1994 and as chairman from 1995 to 1996.  Cain was then president and CEO of the National Restaurant Association from 1996 to 1999.  He has served on the board of directors of several companies, including Aquila Inc., Nabisco, Whirlpool, Reader’s Digest, and AGCO, Inc.
Herman Cain’s 9-9-9 plan has been one of the driving forces behind his campaign.  This is a plan that would replace the current tax code with a 9-percent business transactions tax, a 9-percent personal income tax, and a 9-percent federal sales tax.  This plan has been criticized for shifting the tax burden from the rich to the poor.  Since then, Cain has adjusted the plan to be 9-0-9 for the poor saying that “if you are at or below the poverty levels …then you don’t pay that middle 9 on your income.”

As of late, the Herman Cain campaign has been tarnished with accusations of sexual harassment by at least four women.  Two of which, Sharon Bialek and Karen Kraushaar, have come forward publically.  The latest nail on the coffin has been from Georgia businesswoman Ginger White claiming to have had an extramarital affair with Cain for the last 13 years.  All of these accusations have been denied by Cain and his camp.  Cain has confirmed that White is a friend and that he did assist her financially.  Cain has, however, canceled a private dinner with some media heavyweights scheduled for Saturday, December 3.  The who’s who of broadcasting guest list included Matt Lauer, Barbara Walters, Bill O’Reilly, Greta Van Susteren and more.

If Cain does decide to drop out of the presidential race this would shift votes towards the other hopefuls.  Presently, Gingrich is ahead in the polls with 23.9%, Romney in second with 21.3%, Cain follows with 15.5%; Perry and Paul tie next at 8%, Bachmann at 4.8%, and Huntsman and Santorum with 2.3%.  More than likely, Cain dropping out will shift his votes to the two front runners giving Gingrich and Romney a broader lead over the others.
Watch for more news from Herman Cain’s campaign over the next few days and check his website for updates at http://hermancain.com .