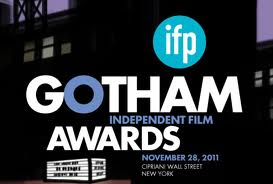 honors of the film awards season.  The Gotham Awards are part of the Independent Feature Project (IFP) and was inaugurated in 1991 as a means of showcasing and honoring films made primarily in the Northeastern region of the United States.  The IFP, founded in 1979 by independent filmmakers, is a series of membership based, non-profit organizations that produce programs that assist independent filmmakers in connecting with film-industry professionals and audience.  Among the other major programs, besides the Gotham Awards, are Independent Film Week, IFP Market, Filmmaker magazine, Filmmaker Conference, IFP Labs, IFP International, IFP’s Sneak Peek Screening Series, Industry Connect, Fiscal Sponsorship.

With this year’s ceremony, the IFP announced the recipients to receive tributes at the Gotham Awards.  The recipients are actress Charlize Theron, director David Cronenberg, actor Gary Oldman and Chairman and CEO of Fox Filmed Entertainment, Tom Rothman.

Charlize Theron is a South African actress, film producer and former fashion model whose credits include well known films such as Hancock, The Devil’s Advocate, The Cider House Rules, 2 Days in the Valley and Mighty Joe Young.  She became the first South African to win an Academy Award in 2004 for her critically acclaimed portrayal of serial killer Aileen Wuornos in the film Monster.  Theron is also an activist being involved in women’s rights organizations, marched in pro-choice rallies, an active member of PETA, and a supporter of same sex marriages.

David Croneberg is a Canadian filmmaker, screenwriter and actor who has been called “the most audacious and challenging narrative director in the English-speaking world.”  Croneberg is one of the predominate originators of a style of filmmaking that explores people’s fears of bodily transformations and infection which is often known as the body horror or venereal horror genre.  Throughout his career, Cronenberg has appeared on various greatest director lists along with, and sometimes even ahead of, Steven Spielberg, James Cameron, Jean-Luc Godard and Ridley Scott.

English actor and musician Gary Oldman was a member of the 1980s Brit Pack.  Often playing villains, Oldman has a list of great movies to his credit, such as, State of Grace, JFK, Dracula, True Romance, The Fifth Element, The Book of Eli, the Harry Potter series, and the Batman trilogy.  However, his portrayal of Sid Vicious in the movie Sid and Nancy is what brought him to prominence which lead to film critic Roger Ebert describing him as “the best young British actor around.”
Thomas Rothman is an American film executive who is co-chairman and Chief Executive Officer of Fox Filmed Entertainment with Jim Gianopulos.

The other awards scheduled to be given out on that night are for Best Feature, Best Documentary, Breakthrough Director, Breakthrough Actor, Best Ensemble Performance, Best Film Not Playing at a Theater Near You and Audience Award.

Tags:gotham independent film awardsindpendent filmsInternet Radiomovies
Previous : DJ Masterplan
Next : Michael Jackson Does Not Deserve to be Remembered Like This