Gay Couples were married at the Grammy’s 2014 tonight by Queen Latifah with Macklemore & Ryan Lewis and Madonna singing by her side. 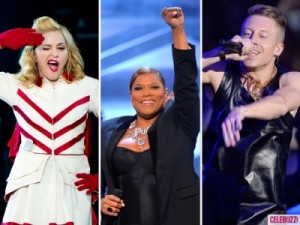 gay marriages. The music industry really flexed their power and strength in support of Gay Marriages tonight. Once the surprise ceremony was completed the whole audience erupted in cheers and gave a standing ovation.

One thing for sure is that Hollywood and the rich liberals have drawn the line and basically declared war on Conservative thinkers and Christians worldwide. The song selection before the Grammy ceremony by Macklemore & Ryan Lewis made several stabs at Christianity basically labeling it as a hate religion.

The music industry and the news media is super power and many of the biggest money makers in the world are gay. The gay community is only 5% of America but probably own up to 50% of the wealth. This was evident during the Grammy’s and the weddings were a planned ideological show of force.

This is a no brainer that the gay marriages on National TV will send outrage throughout the US political halls, but what is going to be even interesting is how the Christian Communities are going to address the blatant slap in the face by Hollywood.

To sum it up this was a huge victory for the gay community and a devastating loss for Conservation Christians. It is going to be interesting to see what the fall out will be over the surprise gay marriages at the Grammy’s. The 2014 Grammy’s will go down in history.