All 17 public schools in Fairfield, Connecticut were locked down after some of them received calls from someone who made gun and bomb threats. The town’s police chief said all school children are safe.

According to David Title, Connecticut, superintendent of schools, “ the 17 school buildings that they operate 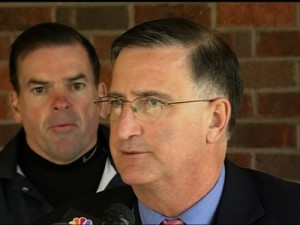 were placed under lockdown”.  He stated that this is something that they practice and that is something that the schools are used to doing and police provided additional resources to all of the schools.  Once that occurred they realized that the day was going to be seriously disrupted. David Title stated that they sent a message out that all Fairfield schools would be dismissed on the early dismissal schedule which will began at noon at the high schools 12:50 PM at the middle schools, and 1:30 PM at the elementary schools.

The Police Chief Gary McNamara of the Fairfield Police Department stated “that the children are safe in the town of Fairfield”.  He also stated that he truly understands that there are thousands of parents were truly concerned and scared and worried about the children. Police Chief Gary McNamara informed the public that the police department is trying to reunite the parents as quickly as possible with their children.  He said he can certainly understand the anxiety and nervousness that the parents are going through, and that the police department is taking that into accountability. Gary McNamara the public that they will move as expeditiously reunite all of the affected children with their parents and guardians.

As of yet, there has been no other information regarding who or what locations were associated with the threats.  Police Department along with the Fairfield in school board move swiftly and there has been no reports of any students harmed.  What you think?