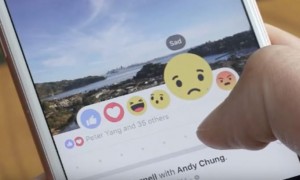 According to Facebook’s product manager, Sammi Krung “we’ve been listening to people and know that there should be some ways to easily and quickly express how something you see in newsfeed makes you feel.”

There are now six reaction that you can us to express how you feel:

CNN money reported that Facebook spent a little over a year developing this feature testing in Ireland, Spain, Portugal and the Philippines before rolling it out globally this week. Facebook reportedly went really deep and doing the homework on this social media experiment by working with sociologist, conducting surveys and ran focus groups to collect the best data for rolling the new Facebook reactions icons out.

So far the user reaction has been mixed most users are still wanting a basic dislike thumbs down icon to complement the like thumbs-up. A lot of Facebook users have been calling for a dislike button for years. In the meantime, Facebook users have to get used to the new options. Keep it simple and old-fashioned by if you don’t like something don’t like it at all.

Facebook currently owns about 70% of the social media market and is constantly updating and changing the way it operates and feels. The new social like icons should bring a more lively and better social media experience to Facebook users.