If one was to listen to Black radio in major American cities, one might think Jesus Christ was running for reelection in 2012.  If one were to listen 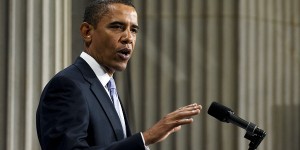 to Democratic Party loyalists on TV or in print, one would think FDR’s Black reincarnation was running for reelection this year. The truth is that in 2012, the only people running for president are the same brand of opportunistic politicians we’ve seen in recent years—and this includes President Barack Obama. What’s interesting about the rabid support that Barack Obama receives is that many of his supporters are often strikingly ignorant about the actual substantive issues that have surrounded his presidency. I dare anyone to ask a random Obama supporter the difference between Obama’s “Affordable Health Act”, and the universal single payer system that many Liberals have supported for several years. You’ll probably hear a pin drop after you inquire.

Many other people have written about the cult behavior of the President’s most ardent supporters. I personally find it disturbing how quickly and passionately Obama loyalists defend a corporately sponsored political image—an image that many will mindlessly have plastered all over their cars, t-shirts and hats for the upcoming election season. Many Obama loyalists couldn’t tell you if the bombing of Libya was in Africa or Alaska, but some are convinced that Barack Obama is some twenty-first century version of Martin Luther King, Jr. It’s not surprising the politicians in our current system exploit the ignorance of the American voter to no end. It’s arguable that the same sort of unthinking cult devotion was present during Bush’s tyranny when our cowboy president casually bombed and maimed Middle Easterners in Iraq for fun and oil riches. Regardless of the actual facts that were provided about the Iraq War nightmare, millions of (misguided) Americans still went on to vote for Mr. W. with enthusiasm for a second term. Please pass the scotch.

Being a Black American, the Obama craze has hit me a little harder because I have spent an inordinate amount of time around my fellow Negroes and have heard church-going Black folk refer to a Goldman Sachs funded politician that has authorized killing overseas as spiritually “anointed”. Scary.

American intelligence and awareness has degenerated across all ethnic lines, and if things keep going this way, I may have to make an exodus to some undetermined country where people who think still exist.