Donald Trump reportedly retweeted a photo that showed the men of the Bush family beside a NAZI Swastika.The title of the tweet was called the “Bush crime family” with the caption “Evil runs deep”. 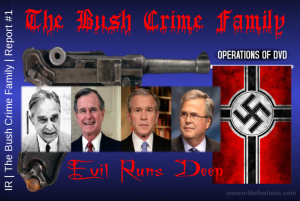 Donald Trump does not seem to be letting up on Jeb Bush and the political bashing looks like it is heating up.

The Trump campaign immediately removed the tweet and stated “this was retweeted by Mr. Trump like hundreds of others. He did not see the accompanying image and the retweet has since deleted it”. This should actually come to no surprise, because Donald Trump has been going head to head with Jeb Bush from day one of the debates. Donald Trump has pretty much been known for speaking his mind and is not being politically correct when it comes to talking about his opponents.

Donald Trump has publicly advocated that Jeb Bush drop out of the race. Donald Trump has a lead at 24%, Dr. been Carson is at 23%, Sen. Marco Rubio with 14% and Jeb Bush is at a distant low at 4%. The insulting tweet that Donald Trump sent could not have come at a worse time for Jed Bush after Marco Rubio pounded him in the last Republican debate.

The Bush family has been in politics for a long time, but this is probably the first time that a political opponent has actually accused the Bush family for being affiliated with the NAZI party. The jab was in direct insult to Jeb Bush but was for his grandfather Prescott Bush and his supposed dealings with the Nazi party in World War II. Donald Trump is very outspoken and it does not look like he is going to stop anytime soon against anyone in his path for his quest to the White House.