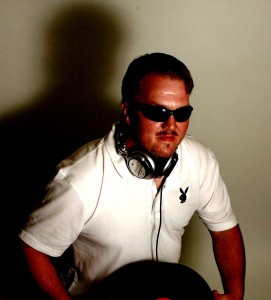 of Northern California that has been digging in crates and making High Energy mixtapes since 1980.

Heavily influenced in all the styles of music including 80’s Electro, Freestyle, Booty, and Hip Hop. Some of his DJ influences come from well-known local and national DJ’s such as Michael Erickerson, Cameron Paul (The true O.G.s of Bay Area DJ’s), Theo Mizuhara (From back in the day). In 1985 at the age of 15 Sacrificing being a kid and a regular social life, DJ Vinyl Fingers began scratching and perfecting his mixing skills. His popularity and success started locally in the Lincoln, and the Sacramento surrounding area, rocking crowds and filling dance floors at weddings, proms, festivals, school dances, public charity events and so many others that talk quickly spread throughout Sacramento to the Bay area as his talent for mixing, scratching, and rocking parties became known , In 1987 DJ Vinyl Fingers began his radio music career as a disc jockey for the University of California, Davis campus radio station KDVS.

His love for music goes beyond the spectrum of mixing tunes. As a producer, and promoter, DJ Vinyl Fingers has found plenty of ways to express himself musically!! As DJ Vinyl Fingers became very familiar with promoting records in 1996 when he started one of the most successful record pools in Northern California “The 411 Record Pool”. As a Disc Jockey, and Record Promoter Breaking new music has gained him a lot of respect in the music industry which has involved interacting with many artist’s such as Notorious B.I.G., P. Diddy, Two Live Crew, Mariah Carey, Ja Rule, Ashanti, E-40 and many more including Old School artists like Egyptian Lover, and LL Cool J which has helped inspire DJ Vinyl Fingers.
In 1999 with his skills in high demand landed him at one of the hottest stations in Sacramento KLNA Power 105.5 as one of the weekend mixshow DJ’s. Not long after becoming known for his innovative style mixing live on three turntables began programming his own daily mixshow called the “Wicked Power Mix” breaking new music! As one of California’s most sought after DJs, DJ Vinyl Fingers has performed at numerous venues and radio stations Including KSFM 102.5 Sacramento and in clubs from Sacramento to the Bay such as Harlow’s(Sacramento), Sidelines(Sacramento), Mcgees (Sacramento), and The Graduate(Davis, ca), and many more!

“My taste of music is very broad and I like to be extremely versatile when it comes to mixing music. I truly believe that a talented DJ is one that can mix all types of music and not just stick with one music style. I mix music to please the audience and I like to create my mixes on the fly with only two things in mind create energy and keep the dance floor poppin!”  This dj is one to look out for already making some major noise in the industry with his unique style of mixxing and his huge still growing fan base DJ Vinyl Fingers is rising to the top!!!