John Sorrentino  A.K.A.  DJ Turbo as Born in Brooklyn New York, and was never without a radio in hand.

From a portable turntable in the 70’s to a pair of Technics 1200’s in the 80’s John always inspired to be a radio personality and DJ. From his Mentor and Radio Host Walt Baby Love to being on his college Radio station WKRB at Kingsborough Community College. 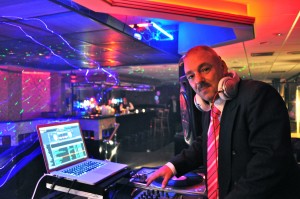 What inspired me most was technology and the way things evolved in and around the studio. I also became involved in designing large Dance Club Sound and lighting systems because being a DJ in a night club meant bringing a total experience to the crowd not just spinning records.

From Being a DJ in many different clubs in and around the NYC area to spending a lot of time in the studio producing music my passion has always stayed with me no matter where I went or what I was doing. Music is Life.

Now back in the studio and on the air John is still mixing it up with the hottest tracks as well as creating his own music and will be releasing some of his own tracks in the upcoming year.

With his residency at Club 279. DJ Turbo is bringing the EDM and Dance music to crowds and to the air waves. 2013 promises to be a big year for Turbo. The duo of Rocketpants Nation. Jon’s son is also a DJ and trained under his dad DJ Turbo. The Team of Rocketpants Nation is currently writing and soon to release some great tracks in 2013. Look for a lot of things to come from us.

Remember to follow us on all of the social networking sites as well as our soundcloud. @rocketpantsradio