Wanted: The hottest DJ in the land!!! 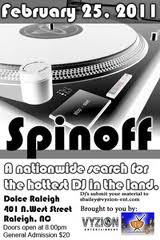 RaleighLifestyle.tv will be hosting Spinoff, a nationwide search for the hottest DJ in the land beginning February 25th at Dolce Nightclub.

Spinoff begins with two live open auditions shows February 25th and March 31st, and concludes with our tournament style Grand Battle show at the Lincoln Theatre on April 9th. During the two audition shows, DJs will have 4 minutes to show their skills in front of a super-hyped crowd and a panel of judges, with the winners advancing to our head to head Grand Battle round for a chance to be crowned champion.

The winner earns bragging rights, a contract to DJ worldwide with Vyzion Internet radio, and a place in our national battle later this year. But it won?t be easy. This battle is filled with twists and ?turns? unlike any DJ contest you?ve seen before. If you think you have what it takes to be the head chef in this kitchen, be ready to bring the heat!

So stake your claim to the throne as the hottest DJ in the country! For consideration to be cast on Spinoff, please submit a 2-minute demo video of you in action to sbailey@vyzion-ent.com or drequa@raleighlifestyle.tv.