DJ Mojo Le Fay has a new radio show on the hottest internet radio station known as Vyzion Radio and its has an APP.  You will enjoy it along with music being played continuously with zero adds and no monthly subscription!!

Talk about convenient and absolutely amazing for a true music fan! Vyzion Radio has teamed up with Charlotte NC’s number one female DJ who still spins real vinyl records on the original wheels of steel. If you don’t know what that means then its known as the Technic 1200 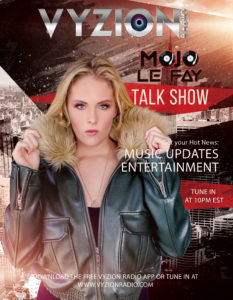 Turntables. DJ Mojo Le Fay has been spinning records in the city of Charlotte, NC for 10 years and she’s very involved in new music and technology as well. DJ Mojo Le Fay is totally up to date on new DJ equipment and music production software, and giving you the best of both worlds when it comes to industry standard hardware.

The new radio show called “MOJO TALK” will be on Vyzion Radio starting early January 2019, and DJ Mojo Le Fay will be letting her knowledge and personality out into the airways! “MOJO TALK” will consist of entertainment news while highlighting the current events going on around the world. The “MOJO TALK” show will feature music updates around the country, along with mentioning music and entertainment events happening in the local scenes. The show will spot light local night clubs and music festivals popping’ off around the nation and in our neck of the woods right here in the queen city and surrounding locations.

The “MOJO TALK” show with DJ Mojo Le Fay will also recognize small businesses in the Charlotte area for quality goods and services tailored for all of our loyal listeners and fans. DJ Mojo Le Fay and Vyzion Radio aim to support local and up & coming small business owners to market their brand on the web! DJ Mojo Le Fay will also be representing “Vyzion Photography” who specialize in high end photography, websites and marketing needs for our clients! The new show will be geared towards the technological side of the music world, providing updates on DJ equipment, Music Production gear and so much more!!

Stay Tuned IN and Tuned ON to Vyzion Radio! Vsss Up!!!