DJ MENACE better known to fans throughout CA as “Nor*Cal’s Hottest DJ, has attracted attention since 1993 when audiences realized his skills on the turntables were beyond comprehension.

Through years of creativity, 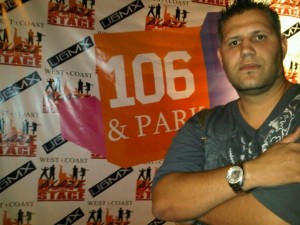 imagination, practice, and dedication he mastered the art of using the turntable as a musical instrument by inventing unimaginable styles and creating unique systems of DJing. Today turntablism continues to advance and branch out into diversified directions.

Since day one of DJing, his display in all aspects of DJing has been creative, stylistic, and impressive. Heavily influenced by the styles of world-renowned DJ Q-Bert, DJ Z*Trip, The Scratch Perverts, DJ Babu, DJ A-Track, and DJ Rectangle. In the late 90’s, the world famous dj menace appeared on the DJ scene displaying his talent and skills. After claiming a few local titles and with a resident spot on Sacramentos premier dance radio station Power 105.5 and several residencies in californias must prestigious nite spots he was declared as one of California’s most sought after DJs, by performing in numerous venues in such places as the sound factory (san Francisco), city nights (San Francisco, CA), empire (Sacramento,ca) image (Sacramento,ca) ,Rocklin live (Rocklin,ca) the bee hive (San Jose,CA) , back beat (Sunnyvalle , ca) and many more (too many to name).

Menaces DJ performances are not only timeless classics, but also portals for aspiring DJs to add and elevate their style. Menace travels the states working with countless artists from all ranges and forms of music. Menace is also know as a whole hearted giver to the new generation of kids and up and comers of all ages. The world famous dj menace is already considered one of greatest DJ/turntablist in the 916; he mixes the best of cutting, scratching and
Un-matchable skills to create a very entertaining and exhilarating performance.Chances are you have heard menace’s mixes being blasted out over the airwaves or in the crowded club one thing is for certain this dj is one to look out for already making some major noise in the industry with his unique style of mixxing and his huge still growing fan base menace is rising to the top!!!

For BOOKING you can contact the world famous dj menace directly

THE EXCLUSIVE MIX EVERY FRIDAY NITE ON www.sactownradio.com