. Whenever asked what made him become a DJ, B.BARNES responds “I fell in love with the sound of the Scratch!” Style, Perfection, and Versatility are just a few 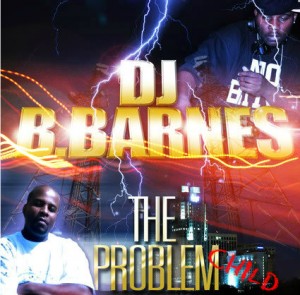 characteristics DJ B.BARNES has mastered to set him apart from the “average DJ” in today’s music business. He has emerged as one of today’s most refreshing and bright young DJ talents out of the east coast.

Born & raised in The Bronx, NY

during Hip Hop’s golden era, DJ B.BARNES, rightfully nicknamed “The Problem Child” has been making his mark along the musical path since the age of 16. From very humble beginnings DJ B.BARNES began his DJ career creating warm-up mixes for his high school basketball team. After graduation,
DJ B.BARNES packed up his turntables and set sites to travel the world by enlisting in the U.S. Marine Corps, and eventually landed in the Tarheel State.

In 2003, B.BARNES went on to further his education at The University of North Carolina at Wilmington, where he earned a degree in Business Administration. It was during that time, B.BARNES joined the local radio station street promotions team “The Flavor Unit” at WNMX Coast 97.3FM. The daily interaction with radio and on air personalities prompted the decision to go back to doing what he always wanted to do – DJ! Since that time, he has reemerged on the scene with reckless abandon rocking clubs & airwaves up and down the east coast.

To date some career highlights and clients include: 2011 New Years Eve R.B.C. Center (Raleigh), 2009 B.E.T. Hip Hop Awards Style Suite (Atlanta), The Garner Circle PR, VICTORIA SECRET, CIAA, HPNOTIQ, HENNESSY along with many other prominent event management companies & nightclub promoters. Amidst the club dates, bookings and mixtapes, DJ B.BARNES commanded his first radio experience in the summer of 2008 at WXDU 88.7FM Durham (Duke University Radio). His first On-Air position was from 3AM – 5AM once a week. That show became a fan favorite and quickly moved to a prime time slot where he became the only urban radio DJ hosting his own weekly mixshow two nights a week. DJ B.BARNES has had featured mixes on Radio One’s WQOK K97.5FM.

DJ B.BARNES’ energy, and distinct style of scratching & blending spans across every genre to include but not limited to Hip-Hop to Rock-N-Roll, Funk, Techno/Dance, Soul, and Pop. He has performed in an assortment of venues and events from family reunions to college parties, nightclubs, bars, and private events, in several major cities throughout the country as well as overseas. DJ B.BARNES currently hosts a podcast that averages over 1300 plays/downloads monthly across countries worldwide. DJ B.BARNES has held syndicated mixshows on Sprint Radio, WCCG 104.5FM, and World Cast Radio in addition to the numerous mixtape series distributed throughout the United States.