suffered a heart attack while at St. John’s Hospital in Santa Monica for an outpatient procedure, his publicist said Wednesday. “Attempts to resuscitate were unsuccessful.” 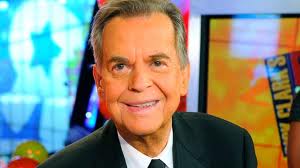 Clark suffered “a mild stroke” in December 2004, just months after announcing he had been diagnosed with Type 2 diabetes.

That stroke forced Clark to cut back on his on-camera work, including giving up the hosting duties for the “Dick Clark’s New Year’s Rockin’ Eve” specials. He returned as a co-host with Ryan Seacrest on December 31, 2005.

Born Richard Wagstaff Clark in Mount Vernon, New York, on November 30, 1929, he began his broadcast career working at a radio station managed by his father.

Clark, who was married three times, is survived by his wife, Kari, two sons and a daughter.

Dick Clark was an icon and was responsible for bring music to the world on a mass media level. Dick Clark had millions of viewers each week and it can be said that he paved the way for networks like MTV and VH1. Dick Clark was a musical pioneer and his legacy will live on forever. Our hearts go out to Dick Clark and you will always be remembered.