ivermectin dosage for goats how much ivermectin injectable to give a goat can you give ivermectin pour on orally to goats ivermectin tablets for sale ivermectin cream 1.0 w/w uses in hindi ivermectina pode tomar todo mês
Home
News
Sports

Deshaun Watson, a Heisman nominee quarterback led the Clemson Tigers to their 2nd ever national title game since 1981 to face the Alabama Crimson Tide on January 11th.

Although the final score was 45-40 in Alabama’s favor, Deshaun Watson did what no college quarterback had ever 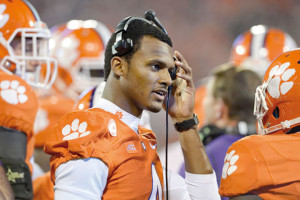 done before in a season as well as a game. Deshaun Watson became the first ever player to pass for 4,000 yards, and rush for 1,000 yards in a season in the history of FBS.

Deshaun Watson the sophomore quarterback had a career night in the national championship game as well; breaking Matt Leinart’s old record of 365 yards passing in a game by throwing for 405 yards, and breaking Vince Young’s all purpose yards record of 467 yards in a National Championship game with 478 all-purpose yards.

So what’s next for the young 20 year-old phenom? The NFL right? WRONG. If his age didn’t give it away, Deshaun Watson, as mentioned earlier in the article, is only a Sophomore on the way to becoming an NCAA and football legend. The “Way Too Early” polls already have Deshaun Watson and his Clemson Tigers at the number one seed to begin the 2016-2017 season.

Deshaun Watson finished Third overall in the Heisman Trophy voting with 4,104 passing yards, 1,005 rushing yards, and 47 touchdowns. The Gainsville, GA phenom will have extremely high expectations placed on him for the upcoming season. Watson may even end breaking his own record! Go for 5,000 Deshaun Watson!