Acting out. Bad Attitude. Too tired. Not feeling like doing anything. If a teen were to come to the typical adult with any or all of these issues, the 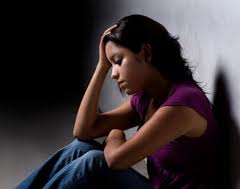 adult would probably brush it off or take it as just another teenager that doesn’t have their act together and wanting attention. Well, that second statement may be true. However, dig deeper into your own self and remember what it was like when you were having them feelings. Unfortunately, the four things listed (and others), get swept under the rug for adults to not really think about. On the other hand, the teen that is doing these things is actually showing signs of depression.

Readers, you asked for it, and here it is. I asked what you wanted me to talk about in March and you answered. You told me that you wanted to talk about depression. Yes, I said talk so that means that I’m expecting you to comment and have an open discussion. Since depression is such a broad topic, I decided to break it down into segments and cover as much as I could this month. Tonight, I will be taking a deeper look into teenage depression. I hope that you find this informative and that it came help you in some way. Let’s continue.

It is common for teens to go through bad moods during these years. These are the confusing years because teens are no longer children, yet they are not adults. They are walking a thin line between still needing their parent figures and not needing their parent figures. Another reason for the confusions is the fact that hormones are going crazy and they really don’t want to talk about them. On the other hand, they may want to talk about them but the adults in their lives are not ready or willing to have that conversation.

Here is a staggering statistic. Roughly 1 in 8 teens are diagnosed with depression. That’s roughly 12.5%. Of those, only 20% get the help that they are needed. The general public sees 12.5% and thinks that isn’t that bad. I argue that it is bad. Why? That number does not included the hundreds of cases that are not diagnosed or are misdiagnosed each year. Therefore, that is not a low number, that’s an incorrect number.

For teens, if depression is left untreated, the road ahead can be very tough. It can lead to depression as an adults, violent and reckless behavior, and even drug and alcohol abuse. Most disturbing is that depressed teens do not excel academically, which can lead to them not getting into their dream college or university of landing their dream job.

Depression can lead a teen down a horrific spiral if it isn’t diagnosed or treated. There are several other signs of teenage depression, other than the four that were previously listed. They are change in sleeping habits, change in eating habits, frequent crying, and other things. However, there are ways that you can help.

First of all, start talking. Encourage the teen to talk to you. It may take some effort at first, but if you show that teen that you seriously care about their health and well-being, they will be more accepting of that fact that you want to talk. Now, when you get them to talk, remember to do the following: offer support, be gentle but persistent, listen without lecturing, and validate feelings.

Second, reach out to people so that you and your teen have a support system. This is not something that you want to go through alone. Often, depression affects the entire family and it is going to take the entire family to get through this time.

Lastly, stay encouraged. This does not have to be the end of the road. Remember that you are not alone as a teen or a family going through this. There is help out there and people ready and willing to help. There are better and brighter days ahead.

If anything that you have read sounds familiar for yourself or another member of your family, I encourage you to reach out to a trusted adult. I also encourage you to read more about teenage depression so that you may be able to help yourself and someone else. The material used tonight came from http://helpguide.org/mental/depression_teen.htm and http://kidshealth.org/parent/emotions/feelings/understanding_depression.html. However, please know that there are other sources that you can go to as well.

As previously stated, since you asked for it, I want us to talk about it. Leave me a comment at http://shaylamaideistalking.blogspot.com and follow me on twitter @ShaylaMaide. I would love to hear from you. The only way that this topic will become less taboo is if we start talking about it. In saying that, let’s talk, and while we are talking, let’s save some lives.