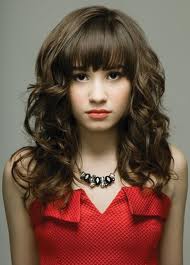 Demi Lovato…back to the music……

Demi Lovato has been through a lot at the early age of 19. She has starred in her own television show for Disney, guest starring roles on other shows, three Disney TV movies, an appearance in the Jonas Brother’s concert movie, and two albums under her belt with another one on the way. Then there are the not so glam things in her life, such as, the bullying she experienced as a child that led to the eating disorder and selfmutilation. Then there was the nervous breakdown which led to a stint in rehab to treat her bulimia and self-injury issues as she was also diagnosed with bipolar disorder. After her release from rehab, Demi decided not to go back to her show “Sonny With a Chance” in order to focus on her music career.

So what’s happening with her music career? The main word here could be tour. Demi will be playing two intimate shows in mid-September. The first concert will be at Hammerstein Ballroom in New York City on September 17 and the second concert will be at Club Nokia in Los Angeles on September 23. Both concerts sold out within 30 minutes once they went on sale. Now the great marketing thing about these two sold out shows is that her newest album, Unbroken, with chart topping single ‘Skyscraper’, will be released September 20 right smack dab in the middle of all the media blitz around the shows. Smart girl.

Demi says that these two shows are meant to be a thank you to her fans. “It definitely is (a preview). I wanted to say thank you to my fans,” she told MTV. “I wanted to show them how thankful I am for the support they gave me for ‘Skyscraper’. At this point, ‘Skyscraper’ has done so well because of them, and I want to show them how thankful I am…..and hopefully when I perform the concerts, Unbroken will be coming out. I’ll be really nervous to get back onstage for the first time since then, but I’ll be really excited.”

When asked was this a tease for a bigger tour, Demi smiled and said in a very coy way “This could be a tease for a tour, I don’t know.” The showbiz interpretation of that statement for those that don’t speak the language is “This is a test to see if I am ready to go back on stage and also to see if I can still sell tickets. If everything is a success and my meds get me through it then there will probably be a concert because, hey, I got to push this new album, man.”

Speaking of the Unbroken, I think I really want to check this out. When she got out of rehab, Timbaland expressed interest in working with her and she took him up on it. The first track of the album features Timbaland and Missy Elliot in a song called ‘All Night Long’. Demi also has a track featuring Jason Derulo called Together. Demi began working on this album in July 2010, before her stint in rehab, and she describes it as having a more soulful and R&B inspired sound. The first single, ‘Skyscraper’, premiered at number 10 on the Billboard 100 making it her first top 10 debut.

Good luck, Demi. Knock these two shows out the box and do a bigger tour. Hopefully, we will see you back in front of the screen soon also.

” WVYZ – Vyzion Radio the number one Hiphopnc station and the world’s best internet radio station and your best source for free radio.”

Tags:Demi Lovatodemi lovato musicHipHopNCInternet Radiomoviespeople
Previous : How Old Is Madonna and Is Lady Gaga Taking Her Place
Next : The Re-Release of Star Wars