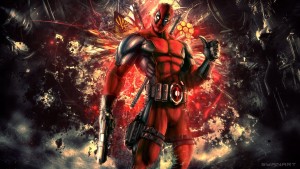 kind of twisted and could be compared to a good guy joker. Expect for him to be profane very violent and hilarious all at the same time.

Deadpool is Based upon Marvel Comics’ most unconventional anti-hero, Deadpool tells the origin story of former Special Forces operative turned mercenary Wade Wilson, who after being subjected to a rogue experiment that leaves him with accelerated healing powers, adopts the alter ego Deadpool. Armed with his new abilities and a dark, twisted sense of humor, Deadpool hunts down the man who nearly destroyed his life.

Before Deadpool became a superhero. He was an ordinary guy looking for a cure for cancer. As part of a deal to save his life he had to agree to be a superhero in a red ninja’s suit. Deadpool is almost like a cross between Captain America, Wolverine and Spiderman with the guns. Simply put this superhero will not miss whatever he shooting at. Deadpool has been one of the most popular Marvel Comic superheroes over the past 25 years. This movie looks like it is going to be a box office hit.

Ryan Reynolds released several leases on Twitter and the buzz is getting out very quick about Deadpool. Although this is a superhero movie we don’t think this is going be recommended for people who believe in gun-control or have small kids. This is going to be high intense and action-packed nonstop shooting, but if you’re in for action. This looks like it’s going to be a great movie.