Daniel Soares from Commack High School and teenage friends are possibly facing prison time after they hacked into the high school computer system to change their grades.  According to CBS news “the 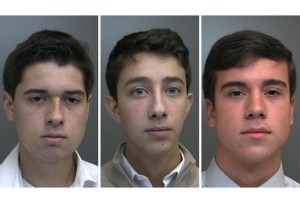 initial attack was three months ago.  Investigators traced it to the house of Daniel Soares, will they call the mastermind” behind the brazen attack.  He and his accomplices Alex Mosquera and Erick Vaysman, were arraigned in Long Island courtroom Thursday.”

According to the police Daniel Soares broke into his high school after hours.  A device called a key logger” to use the device to obtain the school’s computer password from a teacher’s computer. Daniel Soares .  He then had the ability to assist the school system remotely from his home.  According to New York magazine “with the information Daniel Soares hiked up at least for if he is grades on what sounded like an already decent report card in which he already had a 94 and turned it into 100. Daniel Soares is also accused of changing a grade for Erick Vaysman who is being charge as an alleged accomplice. “The other student accused with the hacking. Alex Mosqueera, reportedly asked Daniel Soares to find a schedule of one went a little overboard and altered the schedules of more than 300 students student and Daniel Soares went a little overboard and altered the schedules more than 300 students.”

This was the blonder they got the attention of school officials when they noticed hundreds of schedules had been changed in this immediately prompted school officials to alert the police.  Once the police started to investigate Daniel Soares disappeared, forcing his family to file a missing person’s report. “After the visit from police his hacking device was discovered and authorities retrieved schools passwords. Daniel Soares disappeared and was missing for about a week. Daniel Soares eventually Facebook his family and let them know that he was fine and came home.

Students and friends vouched for the boys and claimed that all three of them were good kids in which is probably freaking out about getting into a good college.  Now, instead of facing a good college, they could be facing a bad prison.  According to CBS news Mosquera and Vaysman are facing up to four years in prison for charges of soliciting Daniel Soares for favors. Daniel Soares faces charges of burglary, computer tampering in identity theft and could see up to 11 years if convicted.”  Daniel Soares presently maintains his innocence.

Kids if you want good grades, make sure you earn them honest way.  These new laws are no joke you don’t want, throw your life away for cheating.