, they easily could have waited out the end of the war there. Or, they might have made a few small attempts to free one or two people. 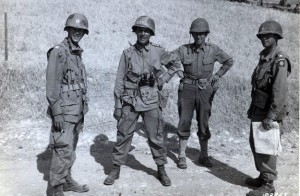 At one such camp, however, the goals were much bigger. These prisoners organized themselves around the collective goal of freeing 250 soldiers in one night. Their story became the basis for the 1963 movie The Great Escape.

Imagine the teamwork required to pull off such an ambitious goal. Groups of prisoners had to engineer and dig tunnels, build supports from wooden slats, dispose of dirt, create bellows to pump air into the tunnels, and light the tunnels. According to one list, the supplies included 4,000 bed slats, 1,370 battens, 1,699 blankets, 52 long tables, 1,219 knives, 30 shovels, 600 feet of rope and 1,000 feet of electric wire.

In addition to finding materials for the tunnels, each escapee would need civilian clothes, German papers, identity cards, maps, homemade compasses and emergency rations. Everyone had a job, from tailors to pickpockets to forgers. There were even teams that specialized in distracting the German soldiers.

“It demanded the concentrated devotion and vigilance of more than 600 men—every single one of them, every minute, every hour, every day and every night for more than one year,” John Sturges, who directed the movie account, once said. “Never has the human capacity been stretched to such incredible lengths or shown such determination and such courage.”

There are four changes needed to become a collaborative type of a player:

3.         Focus. A collaborative type of team player concentrates on the team, not himself or herself. Cavett Roberts said it right: “True progress in any field is a relay race and not a single event,” so the focus is different.

4.         Results. You begin to create victories through multiplication.