Look at the stars, look how they shine for you, and everything you do, yeah they were all yellow…..“The “Yellow” sung by the very 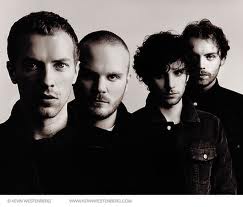 famous rock band Coldplay brought them  worldwide fame with the release of this single album.

And from just over a decade, Coldplay transformed from an unknown struggling band in London to a world famous band that has sold more than 60 million records and won numerous awards for their contribution to the world of music.

Apart from being a part of the music industry they have also contributed towards many social and political causes like Amnesty international and Oxfam’s Make Trade Fair Campaign. They have also performed for charity at Teenage trust cancer, Band Aid 20, Live 8, Sound Relief, and Hope for Haiti now: A global benefit for earthquake relief and The secret policeman’s Ball.

The Story behind the forming of Coldplay Band

Chris Martin and Jonny Buckland initially started the band by the name of Pectoralz. They both met during their orientation week at the University College of London. They aspired to form a music group, which they named as Pectoralz in September 1996. Another friend from their class Guy Berryman joined them and they again renamed it as Starfish in 1997. By this time they used to perform for local Camdem promoters at small clubs. Later on Phil Harvey and Will Champion joined the group and the name Coldplay was finalized after the suggestion of the local student Tim Crompton. Phil Harvey eventually became the band manager. Will Champion who was already trained in playing piano, guitar and the Bass learned to play the drums and finally the band settled into a full-fledged band as we see today.

Then in 1998 they recorded their first album Safety with 500 copies, out of which they distributed some to record companies, some to friends and only 50 were left for the public. They went on to record another album Brothers and Sisters with Fierce Panda. Finally in 1999 they signed a 5 album contract with Parlophone and recorded their third album The Blue Room. But while recording for The Blue Room, various issues started cropping up in the group. Will was to leave the band and Martin started drinking alcohol. But, later the group resolved their issues and made some principles to be independent. They also decided to remove anyone who takes hard drugs.

The Success of ColdPlay – Awards

The year 2009 is considered as the most successful year for Coldplay, they had won three Grammy awards out of seven nominations. The list of awards won by ColdPlay is in fact endless. They have won the Best British Group for three times, the MTV video music awards for five times, billboard music awards for four times and last but not the least seven Grammy awards out of the 26 nominations.

Coldplay will be honored with Best British Act Award at the annual event of Britain’s Nordoff Robbins O2 Silver Clef Award on the28th June 2013. This event will be held to raise fund for charity to provide music therapy to vulnerable adults and children across the United Kingdom.

Also, they can win another award in the category of Best Live Act award at the Britain’s Nordoff Robbins O2 Silver Clef Award with the help of maximum votes from their fans. So fans your support is welcome here!!

They have also made a recent update for Apple users. Their new hit album Mylo Xyloto comic series, which tells the story behind the making of Mylo Xyloto album, is now available in iTunes for iPad, iPhone and iPod touch users.

Unfortunately there are no tour dates scheduled for the year 2013 to catch them perform live.