One of the nation’s most powerful and influential church leaders 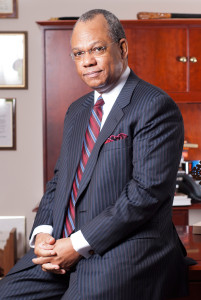 has endorsed Clinton Young for mayor in the September 10 Mount Vernon Democratic primary. Much sought-after by congressional and presidential candidates for his endorsement, Rev. Dr. Calvin O. Butts, III chose Mr. Clinton Young from a field of five Democratic candidates. Dr. Butts has been pastor of The Abyssinian Baptist Church in the City of New York since 1989. In his time at the church, he has been a driving force in Harlem’s reemergence as a center of cultural and economic growth.

“Abyssinian draws many members from Mount Vernon,” said Dr. Butts. “The city needs jobs, housing, education, and enlightened leadership. I hold Clinton Young in the highest regard and believe he is the man to lead Mount Vernon to a more prosperous future.”

“Dr. Butts moves among the very powerful and influences presidential elections, so I am very grateful for his backing and attention to Mount Vernon,” said Mr. Clinton Young . “His experience with the turnaround of Harlem will be valuable to me when we begin the hard work of rebuilding our city. He is a longtime friend, and I know Clinton Young will always be available to share information and open doors for Mount Vernon.”

The Abyssinian Baptist Church was founded in 1808. The church has been a center of the Harlem community since it moved in the early 1920s to its current location, where under the leadership of Adam Clayton Powell, Sr., it grew to become what was then the largest Protestant congregation in the world. His son, Adam Clayton Powell Jr., the first black man to be elected to Congress from New York, succeeded Powell, Sr. in Abyssinian’s pastorate.

A long time Mount Vernon resident, Mr.Clinton Young served as the 20th mayor of the city from 2008 to 2011. His administration has been praised for crime reduction, low taxes, and clean, efficient government. He previously served on the Mount Vernon School Board from 1982-1992 and in the Westchester County Legislature from 1996-2007. Mr.Clinton Young and Dr. Butts are class of 1972 graduates of famed Morehouse College in Atlanta, GA.