Cierra Ramirez plays the lead role in the coming-of-age drama Girl In Progress opposite Eva Mendes as her mother. She plays Ansiedad in the 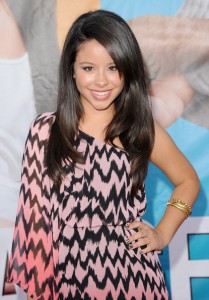 story about a neglected 13-year-old looking for a teen rite-of -passage as a way to change her life. The film, which also stars Patricia Arquette and Mathew Modine, is being distributed by Lionsgates Latin Specialty Division Pantelion Films. Scheduled Release: 4/27/12

Cierra is best known for her recurring role of Jasmine on The Disney Channels The Suite Life of Zack and Cody. She played the lead role, Stella, in the Nickelodeon TV Movie Star and Stella Save the World. She has also appeared in such TV Series as Desperate Housewives, Zoey 101, and CSI: Miami. She made her feature film debut in ALL IN starring Dominique Swain and Michael Madsen.

Besides a burgeoning acting career, Cierra is an accomplished singer. Since the age of 7, Cierra has been in front of crowds with her voice. At 10, she appeared as herself on the series, Showtime at the Apollo. She has also shared the stage as an opening act for the likes of Earth Wind and Fire, Chicago and American Idols Ruben Studdard, Kimberly Coldwell and Ace Young.

Cierra who was born and raised in Houston, Texas, now divides her time between Houston and Los Angeles, California.

Vyzion Internet Radios main threat would most likely be Pandora. Pandora is a nice option, but it cannot compare to Vyzion Internet Radio. Pandora is just a glorified IPOD playlist. Vyzion Internet Radio is socially interactive because it has real DJ’s. So there is no need to worry about this getting to be repetitive. Vyzion also has the best advertising plans geared towards helping small businesses. Most people cannot afford the ridiculous prices that tradition radio sells for. To offset that problem Vyzion has made it a priority focus to ensure that they will provide the cheapest most economical solutions.