Cierra Ramirez, star of the hit television series “The Fosters” on Freeform, has announced that her much anticipated debut 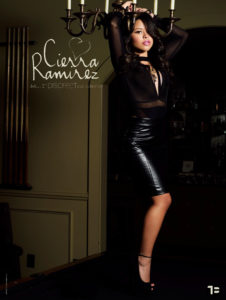 album entitled “Discreet” is set to be released on June 20th – the same day as the Season 4 Premiere of the award-winning show.

Cierra Ramirez has been working on her urban/pop project over the past year with Executive Producer and Young California on-air personality DJ Carisma of LA’s Real 92.3 (2016 Global Spin Awards Female DJ of the Year), who says about Cierra Ramirez: “A lot of artists and projects get presented to me, but Cierra has that something special that I knew my listeners would react to.  We cut some great records and Cierra slayed on the vocals and shines in the video. Young California welcomes a new “Young Queen”

The project is backed through a joint-venture between industry executive Timothy Temper’s indie label TRIBECA MUSIC GROUP and music veteran Ghazi Shami of  EMPIRE Records/Distribution, who remarks; “We’re excited to partner with Tribeca Music on Cierra’s debut EP. She’s built a tremendous brand as a successful actress and EMPIRE is excited to help her to do the same as a recording artist. Cierra Ramirez is super-talented and exactly the kind of mainstream artist that we can help take all the way”.