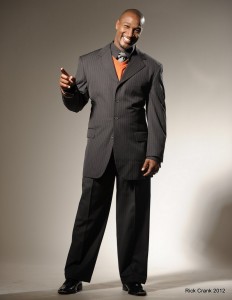 February 15, 2012 (Charlotte, NC) – As Charlotte’s favorite celebrity checks out his CIAA schedule, he embraces the motto “Go Hard or Go Home.” CBS Radio personality Nolimit Larry will work on little to no sleep during the annual tournament that will bring over 100,000 people to Charlotte Feb. 27th through March 4th.

The CIAA is the most popular historically black college and university basketball tournament in the country bringing a slew of celebrities from Diddy to Rick Ross to the Queen City for games and night life entertainment. Nolimit Larry will host an array of events as well as wake up at 4:00 each morning to host his daily radio show, Nolimit Larry & the Morning Maddhouse on WPEG Power 98 (97.9 FM).

He will spend the week interviewing music artists, actors and CIAA officials about their plans for the big week. In addition to his regular jock duties, Nolimit has a robust event hosting schedule. Attendees can catch the hilarious personality who brings the life to the party at the following affairs:

About No Limit Larry

No Limit Larry is host of CBS Radio’s morning show – The No Limit Larry & The Morning Maddhouse on WPEG Power 98. During his tenure in the business, Larry has become one of the most recognizable names in radio. He’s earned Personality of the Year twice by Retail and Records, number 23 in the Source Magazine’s Top 30 Top Radio Power DJs and Creative Loafing Personality of the Year award.

Vyzion Entertainment is a Raleigh, N.C. entertainment firm that caters to the seasoned and up and coming entertainer.  Vyzion Entertainment takes pride in working with each customer on an individual basis to provide them with exceptional service to make their dream a reality.  We ask the artist what they want instead of what we want. Integrity, loyalty, honor, and respect are the four pillars that our success will be predicated on.  Vyzion Entertainment believes strongly in establishing and maintaining loyalty with its associates. The company covets strongly in creating win-win relationships to ensure that all parties involved will exceed expectations.