He’s pacing back and forth throughout the studio, biting his nails, and meditating to his track. It’s definitely not nervousness. I call it concentration and soul-searching. This artist never forces a song. He doesn’t do anything he doesn’t feel. In fact, listening to his music, 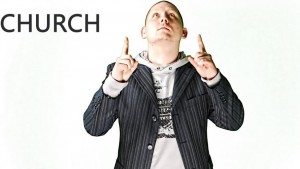 it’s all core. It simply defines victory, pain, and struggle. Just as his button-up shirt is consistent to his straight-legged jeans, so is his music with the life that he’s trying to live. Driven, motivated, and anchored by God, he is without a doubt ready to share his story.

What we know as FEAR…he obliges, calling it (F)alse (E)vidence (A)ppearing (R)eal. Nate Church has his own fearless notion of life and music is his platform.  Born March 25, 1984, Hip-Hop music has become natural to 28-year old Nate Church, who is now emerging from Raleigh, North Carolina, with an inner ambition to spread his music globally.  “I want Hip Hop to be more responsible, more conscious of what is going on in the world. Most people don’t have a Bentley, or Phantom. Most people can’t afford mansions, or a lot of luxuries in this world. I want Hip Hop to reinvent the relationship between the music and the audience.”  Growing up, Church survived many situational circumstances. Church was adopted at 2 weeks old, wasn’t able to foster a relationship with his biological mother until his adulthood, and with his livelihood paralleled with an unstable home, he lived in different parts of the country.  Creative writing and poetry was a passion that became short lived when Church fell in love with Hip Hop. With the encouragement of some school friends, Church began writing rhymes. Shortly thereafter, hip hop became an out of body experience for the North Carolina MC.  Although a Hip Hop artist, surprisingly, Church was heavily influenced by some of music’s biggest icons: Michael Jackson, Al Green, and Stevie Wonder, just to name a few. The production of his music is infused with samples of classic, soulful ballads that are laced with the lyrics of an artist who simply strives to make an impact on all listeners. Church is determined to make his music relatable amongst a vast audience by sharing life experiences, lessons, and triumphs.  “I want all people to relate to my music. My brand is positive energy. I have plenty of songs that can be translated into whatever the listener decides to take back. I love providing that experience for people. That‘s what keeps me inspired.”  With a mission to control his own creativity, Church strives to create himself as a successful independent artist.

Church believes music today is over-saturated and that the talent bar has been lowered. He understands you have to be the hardest worker.

He often reminds himself that, “Hard work beats talent unless talent works hard.”  Despite life’s misfortunes and downfalls, Church always counts his blessings. He is forever thankful for his family, health, and of course his passion and motivation to create music. His mission to create music has definitely cost him a lifetime but for now it is free for all his fans and supporters.

A catalog of his music is available on http://www.reverbnation.com/Church919,

Listen to Church on Vyzion Radio by clicking here!