Who? Who is Amanda Lambert? Sorry if I am not hip to country music but I have no idea who she is. But anyway, it is said that she had it in for Chris Brown. Amanda bashed Chris Brown and the 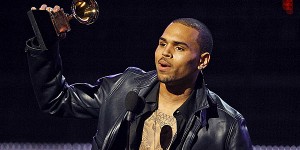 Grammys because he was allowed to perform on the Grammys. She feels like he shouldn’t have been allowed to perform because of his assault on Rihanna back in 2009. Ok I didn’t like what Chris Brown did to Rihanna but I don’t think it should affect his career. He did his time for the crime. So why bash. Now when I was doing research, it seems to me that Amanda is using Chris Brown to boost her image and her sales.

At a concert on February 16 at the University of Massachusetts, Lambert was about to sing her song “Gunpowder and Lead” (What a name) which is about a woman who kills her abusive husband. Wait side bar… Amanda’s song “Gunpowder and Lead” is similar to Rihanna’s song “Man Down”. Anyway before she began she spotted a sign in the audience that read, “Take Notes Chris Brown.” So Amanda held up the poster and asked that audience to take pictures of it and tweet it. Well that’s what they did.

The photo went viral and it eventually got back to Chris Brown. He didn’t take it well and I don’t blame him. I understand Amanda being against domestic violence, but to start to involve Chris personally in it is ridiculous. Get a life and stop riding his coat tail. Actions like this seem like pure jealousy. So Chris responded on twitter saying, “Using my name to get publicity? I Love it! Perform your heart out!” Then he wrote, “Go buy @miranda_lambert album! So motivational and PERFECT!”  I think his comeback was funny and well put. Why would she even put herself in the middle of that situation? I know a lot of people have their opinions on the situation and a lot of people aren’t happy about Chris and Rihanna now working together again, but for Amanda to actually talk about Chris at her show is lame and far fetched. Side bar… Chris and Rihanna just released two songs, “Birthday Cake” and “Turn Up the Music” remixes.  Anyway if Amanda needs sales that bad then step your game up. Chris Brown is on the top of his game regardless of what happen in 2009. Keyword in the last sentence is 2009, because what Chris Brown did was in the past not the present and if Rihanna can forgive and let go then everyone else can too. Really it’s no one’s business but Rihanna’s and Chris and Amanda has no right to bash Chris Brown.

Tread lightly Amanda because you might cross that line to defaming his character. He went to court and did his time. Did she not forget this? You can’t keep beating a person up for their past. Chris Brown will never be able to get over it and move on and be a better person if people like Amanda Lambert keep crap going. If she didn’t like the Grammy’s decision to let Chris perform then don’t ever go on the show again. Amanda needs to find another outlet, because trust your performance will never touch Chris Brown’s performances nor will your sales. Sorry, Ms. Luvly stepped left for a min. But it is what it is.

Amanda Lambert is just looking to spike her sale. Stop riding the coat tails of others, get a life and do some serious grind of your own to make it happen…