Chris Brown is once again in trouble. To make 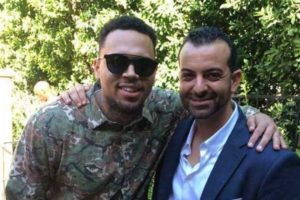 matters worse, he is being sued by his manager Mike G for supposedly viciously beating him up.

According to TMZ Mike G reported that Chris Brown repeatedly punched him in the face and neck and caused him to have to be hospitalized. Mike G also complained Chris Brown was not apologetic about what he did to him and mocked him on social media by bragging to all his friends of what he did.

Mike G claimed that Chris Brown told people work on his tour that if they got out of line that they would get beat up like Mike G did. According to TMZ “Mike G claims, without provocation, Brown took him in a room, brutally attacked him and repeatedly punched him in the face and neck which landed him in the ER.

Mike G reportedly stated that he feared for his life because of Chris Brown’s gang member friends and that the whole incident was fueled by drugs. Mike G was actually hired by Brown in 2012 to help and get him out of debt, off drugs and help get his image back in good standing after Chris Brown had assaulted his then girlfriend, Rihanna.

Chris has been no stranger to drug rehab, anger management or getting in trouble with the law. Just recently as early 2016. A woman accused Chris Brown of punching her in the face, this is still being investigated and his team came to his defense denying that he did it. Hopefully Mike G and Chris Brown can get this resolved immediately and we all can just get back to enjoying great music from Chris Brown.