Four Marines were killed at a recruiting center and three others were injured. According to the FBI 24 year old Kuwait born shooter Mohammod Youssuf Abdulazeez, is also dead. According to authorities the shooter had no prior 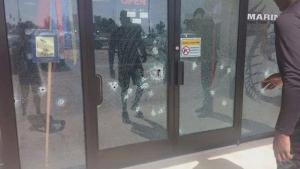 military experience, and there was no indication that an attack on this scale would have occurred today. All four Marines were killed at the Naval Reserve Center in Chattanooga. There were also three other people that were injured in the shooting the conditions on these victims has not yet been released.

According to Col.Jack Jacobs. He feels that there is no way that the Marines were in a position to protect themselves. Spokesman of the United States Army command said that recruiting centers are normally in unguarded areas like storefronts or malls.

According to the FBI and terrorist analyst the motive has not been determined. The biggest concern is if ISIS is behind this massacre. President Obama was in and spoke at the White House about the shooting earlier today he expressed his condolences to the families and stated that there would be a thorough investigation concerning this tragedy. It has yet to be determined whether this is a domestic or international terrorist act.

The shooting attacks occurred 40 minutes apart at two different locations. The US Attorney General is treating this is an act of domestic terror act at this present point. All military facilities are all on alert and are taking every precaution against any and other possible attacks. The attack started just before 11 AM when several fatal shots were fired at the recruiting stations and windows were riddled with bullets. The information on how the suspect was killed has not been released.

Little is known about the suspects other than his parents were natural citizens. All of his social media accounts, phone records and electronics are being investigated. The suspect was known to have known the area very well and lived in the town for 17 years. According to neighbors and friends they stunned and shocked about the news. There is nothing in his past that would have indicated that he would have done something like this.

This investigation is ongoing.