Carly Rae Jepsen is as polite as she can be something you shouldn’t be surprised about since she is a Canadian girl, singer and composer.

Her walk to fame began when she won 3rd place in the television reality show contest Canadian Idol (The Canadian version of American Idol). This opened the 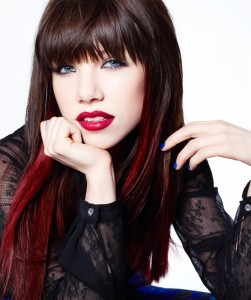 doors to her and she went on the Canadian Idol Top 3 Tour.

After her first walk to stardom, Carly Rae Jepsen signed a contract with the Fontana Records Studio and with MapleMusic – launching her first album, the debut album, Tug of War in September of 2008.

It all started to change for the best when three years later she launched the hit “Call me Maybe” with the company 604 Records – this single achieved the first spot on the United States Hot 100 Billboard and it was a Viral hit conquering the Canadian and British market as well. Now, she signed a new contract with Interscope Records which will aid her to spread her influence to the rest of the world.

Having the 2013 Tour in mind, Carly Rae Jepsen is going to be playing on the 5th of May in Houston, Texas.

On the 8th and 9th of June she will be in Portsmouth and Portland respectively and she follows up with cities like Columbus, Des Moines, Vienna and Indianapolis where she will end her Tour on the 30th of August.

For those of you that really love Carly Rae Jepsen I wish you the very best in getting your spot in one of these concerts, as I am sure that tickets will not abound because our lovely artist is enjoying one of the best, if not the best, moment of her entire career.

To here are special perks available for those that are part of Miss Carly Rae Jepsen’s Official Fan Club, so if you aren’t a member now I would encourage you to join to be alert on all of her activities and get some nifty perks.

Alternatively you can bookmark the Carly Rae Jepsen site because we always have the latest entertainment news and facts – and of course, all about the greatest artists of our time.